Politics and Art the Artologica Way

Back before I started painting dividing cells, I painted - other stuff. Mostly abstract watercolors, often in the same kind of grid patterns that I still use. I'm pretty sure that many people suspected my paintings were about nothing, like Seinfeld.  I like to keep my message subtle. I usually don't like art that whacks me over the head with its politics, so I usually don't make it. Here's a little look behind the curtain at some older pieces and what they have to say. 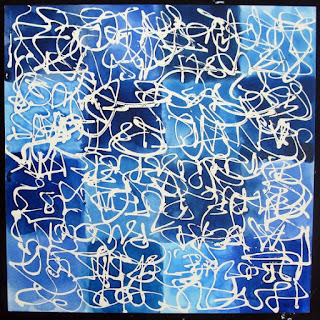 I made a whole series of blue paintings during the run-up to the 2008 election. I was interested in the various symbolic meanings of blue (true blue, blue chip, blue ribbon, etc), especially the idea of "blue states". Blue states, aesthetically speaking , are much calmer and deeper than angry, hot red states. (Of course I would think that because, despite having grown up in Indiana, a became a godless East coast librul.) The scribbles in masking fluid are my thoughts about the primary battle between Obama and Hillary Clinton. I was conflicted. You can read them if you try really hard. 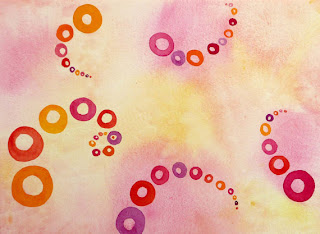 After the stock market and housing market crashed, I started obsessively drawing bubbles. Partly it was a very direct (unoriginal?) response to the bursting of the economic bubble. I also painted a lot of floating zeroes, expressing my inability to fathom the gigantic amounts of theoretical wealth that simply "floated away" as housing values and stock market prices crashed.  Interestingly, despite the cheerful, pretty surface of these pieces, nobody really likes them, and I have hardly sold any. Either people just prefer my work in squares or they can detect the influence of the dismal science lurking beneath. 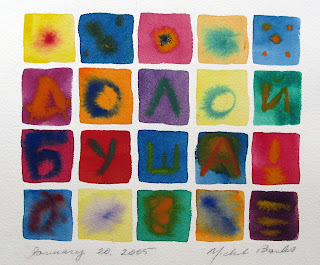 This has been sitting in a drawer in my studio (aka dining room) for seven years. I painted three of these, to commemorate the second inaugural of George W. Bush on January 20, 2005. One I gave away to a like-minded friend, one I sold to a drunk person at a festival, and this one I kept. They all feature symbols such as equal signs, question marks and fish. The text, in Russian, says Долой Буша - "Down with Bush". It is unsubtle. That's OK too.