Caught in a Bad Translation 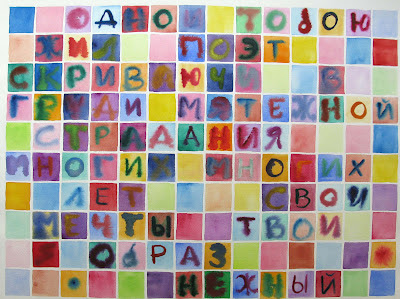 On my trip to storage the other day, I found another piece of my past. This is a painting I did many years ago, probably around 2003. It's another watercolor grid, this time with a deeply romantic stanza from the Russian poet Mikhail Lermontov.

Way back in the day, I studied Russian and lived in Moscow for a few years. But now my Russian is fairly rusty, and I wanted to make sure I wasn't too far off in telling you what this painting said. I couldn't find an English translation online, so I ran it through Google translate. Well, as they say in Moscow, kha, kha, kha!

(Up to here is what's actually on the painting)

For you alone the poet lived,
Concealing in his turbulent breast
The sufferings of many, many years,
His dreams, and your sweet image.

In strife-riven, evil fate,
He had only one subject,
To devote to you his whole soul
And to no one else on earth.

We get the picture. The guy was seriously smitten, and the lady didn't want to know. Here's what Google translate gave me:

The suffering of many, many years,
Your dreams, your way of tender.

For evil warring fate
He had only one thing in the pre <x> Weather forecast:
Devote his whole soul to you,
And nobody else in the world!

Now, to be fair. To be fair, there is some old-fashioned wording in there. The poem was written in 1830. I have no idea why one letter in the word predmet (subject) is in brackets, which obviously threw off the algorithm. But how's that for modern romance?  Poor old Skryvayuchi chest rebel had only one thing in the pre <x> Weather forecast. Oh baby, y u no share ur way of tender?  No wonder he died young of a broken heart.