I regret that I cannot provide the narrative you obviously desire 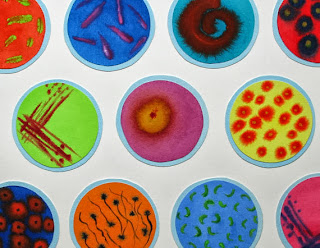 I’ve done six shows in the last seven weeks.  As anyone who has ever tried this knows, patterns begin to emerge in the way customers react to your work. As I have continued over the past two years to increase the amount of science-based art in the mix, I’ve noticed a major new one:  a huge increase in the number of people who walk into my booth and ask, “Are you a biologist?” And it’s starting to bug me.

I understand where that question is coming from, and that it’s not coming from a bad place. People recognize the elements of biology in my work and they want to say something.  It’s friendly. (Although I was slightly alarmed when one woman all but shouted in my face at one show: “science teacher!!!” – i.e., I must be one.) And, of course, there are many scientist-artists out there.

But I’m not a biologist, or even, as others suggest, a science major, and that seems to bum people out. I explain that I’m a full-time artist with a strong interest in science, and they say, “oh”. Or I talk about how I use biological imagery to explore ideas about what it means to be alive, and they think I’m a pretentious artiste.

Look, I’m sorry I cannot provide you with the neat narrative you so obviously desire.

Maybe it runs in my family – my father was a born-and-bred New Yorker with a PhD from Columbia. And yet I grew up in Indiana and Pennsylvania with a gun-owning Republican dad. Yeah – same guy.  One whose grandfather was a Connecticut Yankee named Stonewall Jackson Banks.

Or maybe it doesn’t. Gun-toting Republican Chemist PhD dad certainly failed to turn me into (or even interest me in) any of those things.

I’ve made my own, sometimes odd, choices in life. I get that it doesn’t make a neat storyline. I’ve certainly considered lying and telling people I am a biologist, just to make them happy. But I am haunted by the fear that one of them will turn out to be Michael Eisen. And mostly, I just wish that more people would be comfortable with the fact that non-scientists can love and celebrate science.

Luckily, there are some - like the lady who bought one of my petri dish collages to hang in her bathroom to remind people to wash their hands, and the couple who bought a mitochondria painting because they think it’s cool that we have jelly beans inside our cells.