I’m a huge football fan - specifically, a proud citizen of Steeler Nation.  I can’t wait for the season to start!

But as a female person of the thinking variety, it’s hard for me to root enthusiastically for the Steelers’ quarterback, the giant oaf Ben Roethlisberger, so I have to look elsewhere for QBs to cheer. Aaron Rodgers is obviously out of the question, having beaten the Steelers in the Super Bowl, so I mainly stick with the ones everybody likes – Eli and Peyton Manning. I am delighted to see Peyton back in uniform, as I was to see Eli once again crush the smug Patriots in last year’s Super Bowl.  But my eye is wandering. I fear I must confess it – I kinda love Tim Tebow.

Tebow and I do not seem like an obvious match. I certainly don’t share his fervent Christian beliefs, and I made as much fun of him as anyone when he started out, what with the praying on the sidelines and the horribly embarrassing commercial with Ma Tebow explaining how she didn’t abort him. Ew!

And then there’s his bizarre playing. His physics-defying throwing motion, his abrupt charges down the field, his out-to-lunch demeanor for the first three quarters of any given game.  The insane, impossible wins. The spectacular flameouts.

I laughed as hard as anyone when he got traded to New York. Here was a guy who at 25 was not only a virgin but was proud of it, going to play in the big, mean city for a loudmouth coach.  But damned if he isn’t entertaining to watch. Even Drew Magary, the snarkiest sports snarker in all the land, agrees, hinting that perhaps Tebow is after all, a very nice man and occasionally effective quarterback (although his epic Deadspin post “What if Tim Tebow were gay?” lays out some vastly more interesting possibilities).

Another Deadspin writer, Sean Newell, explains, “We love watching sports because we love watching crazy shit happen. Sometimes that crazy shit is a wildly over-matched team beating its superior. Tebow and the Broncos piloted that roller coaster ride for half the season”. Based on his performance in last night’s preseason loss to Carolina – complete with mad dashes for first downs and wildly off-target throws – we can look forward to more of the same from Tebow the Jet.

As a bonus, because it’s New York, it’s after 6 and he’s not a farmer, we get Tebow in a tux. Thank you, Jesus. 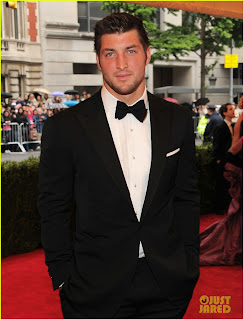