Our Small Rooms at the Cafritz Arts Center 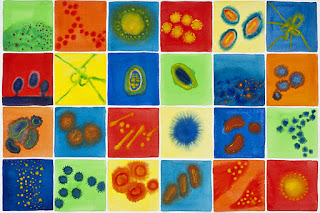 A little more about the Montgomery College Show, which opens today. (Essential info is here) Don't forget, the reception is Thursday, February 9, from 6-8 pm.

This exhibit is part of a year-long series that Montgomery College is sponsoring called "Intersections: Where Art Meets Science"

Some background about the artists - we're both based in DC. I mainly work in watercolor and collage, and most of my work over the last few years has been focused on scientific themes. I was recently featured on the Scientific American arts blog, Symbiartic, talking, among other things, about how I got started painting scientific subjects.

One of the paintings in this show, From the Cells to the Stars, was created in response to a friend's death and Carl Sagan's idea that humans are made of "star stuff". I blogged about it here and it was featured on Brainpickings. This show will be the first time the painting is exhibited in public.

I also feature paintings of bacteria and viruses (those are viruses above). Although we normally consider these to be invaders, viruses and bacteria are a huge part of our bodies playing vital functions in everything from digestion to cognition.

Another piece, Portrait of a Human, is a series of 16 panels, each with a specific cell type, from retinal cells to bone marrow to neurons. This is a brand-new piece created specifically for this exhibit.

Kendall Nordin is a multi-disciplinary artist. For the past decade her practice has focused on visual art, performance, and music. Her visual work has been exhibited in the US, Australia, and Estonia and is included in the viewing program of The Drawing Center, NYC. In the past year, exhibition venues for her work include the Container Space Gallery, Low Lives Festival, the DC Convention Center, Pulse Art Fair in Miami, Porch Projects, Gallaudet University, and the (e)merge Art Fair.

Nordin's video piece, Artists Throwing Rocks (see it here: http://vimeo.com/nordin) was selected for the (e)merge Art Fair in 2011. Her work for this exhibit consists of a site-specific installation on the theme of the cell.

Posted by Artmonger at 6:28 AM