From the Cells to the stars 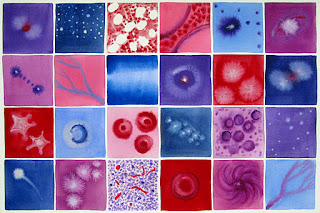 I usually don’t explain my paintings too much. Most of them don’t really need it (“these are dividing cells”) and anyway, I want people to experience my work however they want. But the painting I made yesterday is a little different. I want to tell its story in words.

My friend Cathy died this August. In 2005, Cathy was diagnosed with lymphoma, for which she underwent a year of grueling treatment. After her doctors told her that the disease was in remission, she threw a big party for all the friends – and there were many - who had supported her through the ordeal. Then she pretty much went back to life as usual, raising her two kids and being active in local politics.

Then, in 2010, Cathy started noticing worrying symptoms and feared a relapse. But this time it wasn’t lymphoma, it was MDS - myelodysplastic syndrome triggered by her previous chemotherapy. MDS is a disorder of the stem cells in the bone marrow which causes a decline in the body’s ability to produce blood. To vastly oversimplify, patients with MDS can be kept alive for a while by constant infusions of blood products, but the only cure is a bone marrow transplant. So Cathy had one, with bone marrow from one of her brothers. It didn’t take. She was undergoing high-dose chemo to prepare for a second transplant when she contracted an infection and died.

I wanted to paint something, but not a “cancer painting”. Cathy was a fan of my work and had one of my pieces hanging in her home. But when I showed her the painting of cancer cells I had done for my NIH show, she said, “I don’t know why anyone would want a picture of cancer!” I could see her point. But my work focuses on the cells – the cells that carry us around, that let us live and breathe and think – and that sometimes go bad and let us down.

I was reading about astronomer Carl Sagan, who often expressed the idea that humans are made of “star stuff”. That is, that all the basic elements of life on earth derive from “space debris” from the gigantic explosions of massive, ancient stars. This concept is at once so simple and so mind-boggling that it’s a struggle to absorb, much less to express artistically. I started looking around for ideas of how to visually portray the basic elements such as hydrogen, helium and nitrogen. Um. This is difficult, because you can’t see them. If you do a Google image search on Carbon, it comes up with a lot of gray-black cars. But when I thought about how the elements were released, I found supernovas. Not only are supernovas beautiful and awe-inspiring, they bear a strong resemblance to dividing cells, especially explosively dividing cancer cells.

Here’s the other thing. Carl Sagan also had MDS. He underwent three bone marrow transplants before he died in 1996. So this painting, besides celebrating the cosmic connection that all living creatures share, goes out to Cathy and Carl. From the infinitely tiny cells deep in the marrow of their bones, to the billions of stars in the sky.

Posted by Artmonger at 6:08 AM