Let's Call it An Adventure

After five years of successfully showing my work at science meetings in various cities in the US, I decided to try showing at one in Europe. For the sake of vaguely plausible deniability, let’s call it the LENS conference, in Vienna. (To be perfectly clear, I have nothing bad to say about the “LENS” organization. They were friendly and professional and did just what they promised they would.) It was … an experience.

Before the conference, I spent months making new paintings and designing new scarves. I figured out what frame sizes were standard in Europe and found a source in let’s-call-it-Vienna that could cut mats and backing boards for me in those sizes, to be picked up the day I arrived. I spent weeks trying to figure out how to accept credit card payments in Europe without a Euro bank account. (Create an online shop account and then download an app that allows you to take cards at point-of-sale, as it turns out)

My old suitcase was too crushable for transporting art so I bought a new one. My scarf rack was too big to transport, so I got a European Amazon account and arranged to buy one that would be shipped to my hotel just in time. I was told my booth was “space only” so I figured out how to display my work without any walls. I rented an extra table for 3 days for 100 Euros. In short, I prepared, and prepared, and prepared. And although I was as careful as possible, I spent lots of money, which I figured was OK, because I expected to make lots of sales, as I had at similar conferences in the US.

And then I arrived, and things went downhill from there.

I was feeling pretty good on day one: I found my hotel right away, and though I was not able to check in, I was able to dump my bags and go off exploring. The art store people came through, and I picked up 400 Euros worth of mats and backing boards with no problem. I created a little mounting shop in my room and got all my paintings ready for sale.  Then I discovered that my scarf rack hadn’t arrived. No biggie, I still had a day before the conference started, and the concierge at the hotel helped me to contact the shipper to arrange re-delivery.

The next morning, I set off for the conference center to set up.  Exhibitor set-up started at 8 am. When I arrived around 10, I found that the furniture for the booths had not been delivered. Oh. Check back later this afternoon, they said.

I headed back to the hotel. Still no scarf rack. Shit. Amazon’s shipper claims that “the business was closed when they tried to deliver,” which is absurd because it is A HOTEL. I set off to the local shops to see what I could find as a substitute, and came up with something not too expensive.

Then I went back to the conference center, where I found hundreds of people milling around outside. The building had been evacuated because of a fire alarm. Oh. After 45 minutes or so, they reopened the building, and I went in and found my art exhibitor neighbors busy setting up. “Weren’t you evacuated?” “Evacuated? Huh?”

The exhibitor to my right, let’s call her Sophia, had a much more elaborate booth than the rest of the artists, with three complete walls. “Had I not received an email promising me a booth with three walls?” she asked. I had not. As noted, I was promised space only, so I was pretty delighted to get a back wall, the same as all the other art exhibitors. Oh well.

As we set up, I was amazed to discover that (let’s call her) Sophia had come from (let’s call it) New Zealand. She told me that her local arts council had paid for her booth. I thought “lucky her,” but figured that the cost of her plane ticket and expenses for coming from NZ would still have been enormous.

The next morning, I discovered otherwise. The art exhibitors had signed a contract to be in the exhibits hall from 9:30 to 5:30 for three days.  I guess I was the only one who actually read that, because around 10:30, I was pretty much alone when an irate woman with a “New Zealand” accent came up to my booth and asked me if I had seen Sophia. Not today, I said. “Well,” she said, “she’s my employee and I’m a bit salty because she’s supposed to be at her poster session right now. I paid for her plane ticket to come here and she never said a word to me about having an art booth.” 😮

When Sophia eventually turned up, I told her that the boss had come looking for her. She explained that she was staying with a friend in the suburbs and that the train service was interrupted. I mean, OK, things happen. But by now it looked like she had 1) extracted an extra-special booth from the conference organizers and 2) got someone else to pay for it, then 3) got someone else to pay for her expensive plane ticket without informing them that she would be spending most of the conference doing something else and then 4) blew ALL of it off, showing up hours late for both the art and the science.

At this point, I am just 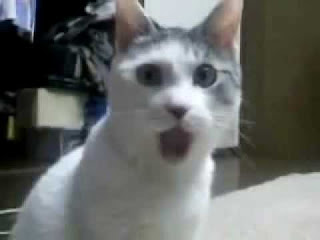 but I decide to ignore the whole Sophia situation. What could I do, anyway?

I should probably mention here that I had personally urged the conference organizers to have art exhibitors, so I feel somewhat responsible for the whole thing being a success. I tweet photos of all the artists’ work. I show up at 9 and stay until 6. I don’t take lunch breaks because the lines for the food are enormous. But I cannot will success into being.

The exhibit hall booths are very far apart, with a carpeted “highway” leading from one poster area to the next, encouraging conference-goers to march right past the exhibits without looking. There’s a trickle of customers. People keep asking me if my stuff is available online (yes but it’s RIGHT HERE NOW and if you buy it online you have to pay to have it shipped from the US). It turns out that nobody cares that my paintings are matted for standard frame sizes (it’s a big selling point in the US). Nobody even looks at my large paintings. I had painted 24 A4 size paintings. I sold 3.

By day 5, I am despondent. Amazon continues to claim that they have tried to deliver my package over and over. I send them an all-caps email explaining that I managed to find the hotel in 5 minutes on the subway despite having never been to Let’s-call-it-Vienna before, and that there is always someone at the front desk. They refund my money.

I have not eaten in a restaurant the whole time I was in LCI Vienna, instead getting food from supermarkets. I was planning to treat myself to a nice restaurant meal once I got into the black after expenses. When it becomes clear that it will never happen, I decide to splash out anyway, and make plans to meet two internet friends who live in town for dinner. The day of the dinner, they both blow me off, one because the World Cup was on, one because she “needed a nap”. I leave town without ever having been in a restaurant, not having shared a meal with another person all week.

The day I fly out, it pours. The elevator in the subway stop is out of order, so I have to drag my bag (filled with all the unsold work) down the stairs in the rain. When I get to the station where the airport bus comes, there is no elevator at all, so I drag it back up the stairs, as four people having a cigarette break stare curiously.  I am very happy to leave.