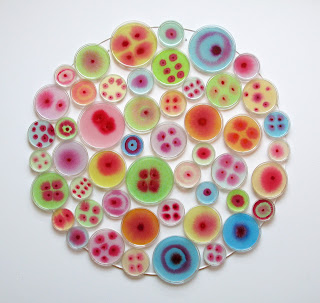 Apart from a few anti-Bush efforts way back at the beginning of my career, I've pretty much avoided making political art. But it was impossible for me, as an artist, an American, and a proud resident of Washington, DC, not to be affected by the political turmoil of the past year. I've been protesting my heart out, and eventually I channeled my anger, despair and hope into Zone of Resistance, a mixed-media piece (watercolor, plastic and resin), inspired by the pattern that forms when antibiotics meet pathogens in a petri dish. (i don't want to over-explain it, but that's pink power overcoming the harmful bacteria) I hope to show it at an exhibition in DC next month.

Update: Zone of Resistance will be on display at the DCCAH Eye Street Gallery from June 16-August 11, in the lobby at 200 I Street, SE in Washington, DC.
Posted by Artmonger at 10:42 AM